Did you know you might have to wait longer than expected for your state pension.
If so, you fall into a group of women who have been particularly badly affected by the changes to your state pension age. UNISON believes that this is unfair and has been badly handled by the government.

At our conference in 2016, UNISON formally agreed to support the Women Against State Pension Inequality (WASPI) campaign. This campaign was started by five ordinary women fighting against the unfair treatment of women born in the 1950s (on or after 6 April 1950) through the increase to their state pension age.

Thousands of women will not receive their state pension on the date they planned for, and will have to work longer than expected or could face financial hardship in retirement. While WASPI supports the equalisation of the state pension age for men and women, the changes are happening faster than promised, with little or no personal notice.

All women born after April 1950 have been affected by the changes but women like you, born between April 1950 and December 1959, have not had enough time to make alternative plans. Many were given as little as one year’s notice, and some did not receive a letter at all. 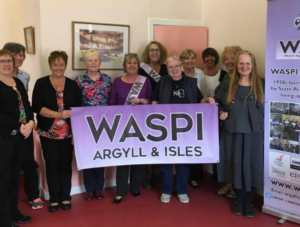 WASPI recommend that everyone affected and born in the 1950s should take action and send in their own complaint to the Department of Work and Pensions (DWP).

‘WASPI women’ are beginning to overwhelm the DWP with their official letters of complaint, which form part of the legal action that WASPI is taking against the government. The WASPI campaign has developed guidance on how you can make a formal complaint to the government department responsible for this maladministration. If the complaints are successful, the Parliamentary Ombudsman can recommend that the government restore the women who have complained to the same financial position as if the maladministration had not happened.

It may be that the Parliamentary Ombudsman could recommend compensation for all women affected by the pension age changes, but there is no guarantee that this will happen.

So, to be sure of receiving any possible future compensation, WASPI recommend that everyone affected and born in the 1950s should send in their own complaint to the DWP. While UNISON is not able to give advice on individual circumstances, the WASPI campaign provides expert guidance on how to make the complaint, and your local WASPI group will offer help and support.