Kevin McIntosh, our Branch Chairperson, attended the conference in Brighton and sent back this report……. 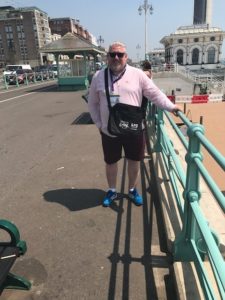 A slower start this Tuesday morning as the National delegate conference gets underway.

Much of the morning is taken up with the Standing Orders Committee report, the NEC’s annual report and the unions financial statements report.

Dave Prentice ( General Secretary ) delivers his conference address this afternoon and its confirmed to conference that Labour Leader Jeremy Corbyn will address conference on Friday Morning. 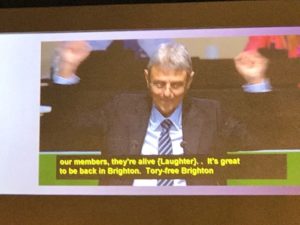 Motions to step up the campaign against bullying and harassment were again promoted- it’s alarming to think that 70% of Unison’s health and safety reps now consider this to be the biggest danger in the workplace.

Motion 20 was focused on tackling “In work Poverty”

The governments autumn statement projects that the average public service worker will be £3700 worse off. Unison are committed to smashing the public sector pay cap and to defend against further cuts that negatively affect every public sector worker.

Thousands of our members are simply not managing as austerity bites.

Motion 55 afforded us the opportunity the highlight and underline Unisons support WASPI and the women affected by this awful pension legislation.

Wednesday starts with the Scottish Young Members award ceremony – recognition of their excellent and now an adopted anti bullying and harassment campaign.

This focuses on a motion carried at last years conference (121) since the motion was passed unison has introduced new formulas for determining activity based funding for branches and this varies from what was in motion 121.

There was some heated debate on this motion even though the NEC supported the motion with qualifications.

Conference rejects the NEC’s recommendation to support with qualifications but supports as it appears on the agenda.

Motion 1 – Celebrates the fact Unison is the UK’s biggest union and notes another year of successful recruitment and encouraging good branch practice in this area.

Different approaches are required depending on the make-up of the branch. Supporting materials / resources should be provided by Unison nationally and through the regions. We must be able to reach out to the fragmented workforce to recruit and rally support.

The legalities and procedures that are required to allow us to take industrial action are cumbersome and are inhibitors to us being able to act swiftly and decisively when our members and their jobs are threatened.